Ever heard about AGEs? Here are three papers that describe how AGEs affect humans.

Neurotoxicity can be induced by glycation reactions. Since glycation is a nonenzymatic process, proteins characterized by a slow turnover are those that more easily accumulate AGEs.

Methylglyoxal (MG) can occur as glycolysis by-product, but it is also present in foods (especially cooked and baked), beverages (mainly those fermented), and cigarette smoke, and it is considered the most potent precursor of AGE formation. More than 20 different AGEs have been identified in foods and in human tissues.

A 2015 study by some of the same authors Antiglycative activity of sulforaphane: a new avenue to counteract neurodegeneration? was cited for a treatment in addition to changing one’s diet to be AGE-less.

“When MG production is increased by high glucose or oxidative stress, glycated proteins accumulate in the brain and lead to glycative stress, playing a fundamental role in the establishment of different neurodegenerative disorders.

Our results indicated that SF [sulforaphane] counteracts ROS by two possible mechanisms of action: an increase of intracellular GSH [glutathione] levels and an enhancement of MG-detoxification through the up-regulation of the glyoxalase (GLO1) systems. GLO1 up-regulation is mediated by the transcription factor Nrf2. SF has been demonstrated to activate Nrf2.

Another mechanism by which SF exerts its neuroprotective activity against MG-induced glycative damage is the modulation of mitogen-activated protein kinase (MAPK) signaling pathways involved in apoptotic cell death. All MAPK signaling pathways are activated in AD.

Brain-derived neurotrophic factor (BDNF) is associated with neuronal survival through its interactions with the tyrosine receptor kinase B (TrkB) and p75 cellular receptors. BDNF expression levels are reduced in the brain of AD patients. SF pre-treatment, before MG addition, not only further increased BDNF levels, but also significantly induced TrkB protein levels reverting MG negative effect on this receptor.

SF totally reverts the reduction of glucose uptake caused by MG exposure. SF can be defined as a multitarget agent modulating different cellular functions leading to a pro-survival frame of particular importance in the prevention / counteraction of multifactorial neurodegenerative diseases.”

“Non-enzymatic covalent modifications (NECMs) by chemically reactive metabolites have been reported to manipulate chromatin architecture and gene transcription. Unlike canonical post-translational modifications (PTMs), NECMs accumulate over time and are much more dependent on the cellular microenvironment. 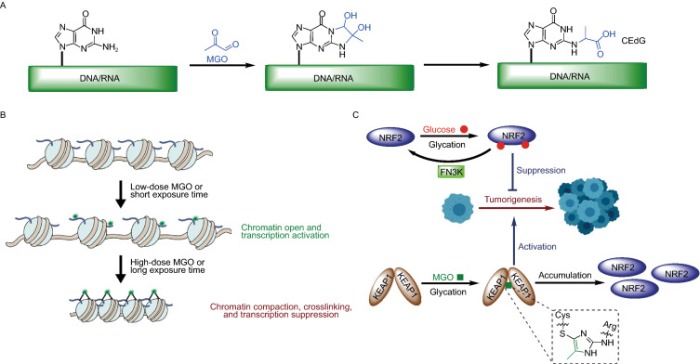 B. Histones are primary glycation substrates because of their long half-lives and abundant lysine and arginine residues. Histone glycation was found to induce epigenetic dysregulation through three distinct mechanisms:

The Transcription factor glycation section referenced a 2011 paper Regulation of the Keap1/Nrf2 system by chemopreventive sulforaphane: implications of posttranslational modifications:

“Nrf2 mRNA level is unaffected by treatment with sulforaphane, suggesting that cellular expression of Nrf2 protein is posttranscriptionally regulated. Posttranslational modifications of Keap1 and Nrf2 proteins seem to play an important role in the regulation of ARE‐dependent gene expression.”

“Neurodegenerative diseases are incurable?” Take responsibility for your own one precious life.

Other curated AGEs papers include: