I used a browser yesterday that didn’t have ad blocker software installed. The below pictures came from one of the ads that displayed: 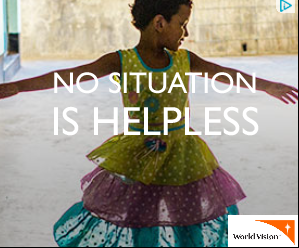 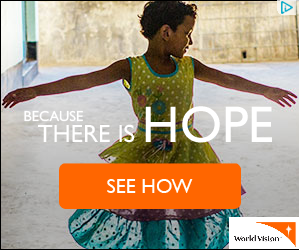 A young girl in a dance position and outfit juxtaposed with an appeal: “No situation is HELPLESS because there is HOPE.” How interesting!

I didn’t click through the ad yesterday to see what was being sold by engaging customers’ beliefs, within which lay hope. When I clicked the ad today, it asked for donations to “Sponsor a Child,” develop “the perfect recipe for sustainable success,” and, at the bottom of the page, “We love because Jesus loves.”

What do we know about this ad’s appeal from reading Dr. Arthur Janov’s May 2016 book Beyond Belief? Can hope change a helpless situation per the ad?

I donated to a similar organization for a few years, but not anymore.

“p. 61 Heavy pains with no place to go just pressures the cortex into concocting an idea commensurate with the feeling.

The feeling itself makes no sense since the original feeling has no scene with it nor verbal capacity; it was laid down in a preverbal time without context, save for the feeling itself.

We cling to those ideas as strongly as the feelings driving us are.

Sometimes we argue with someone not realizing that we are battling a defense which is implacable. They don’t want to hear what we have to say. They want to protect their psyche.

p. 63 Suffocation at birth is registered not as an idea, but as a physiologic fact. It becomes an idea when the brain evolves enough to produce ideas. Then it can produce, ‘There is no air in here.’

A slightly stifling atmosphere in the present can set off this great pain and with it an exaggerated response. ‘I have to leave this woman because she stifles me.’

p. 64 It doesn’t matter about the facts we know if we cannot stop drinking or if we cannot maintain a relationship with someone else.

p. 68 My task is to examine why individuals adopt belief systems, whatever they are, and how certain feelings provoke specific kinds of belief systems..to demonstrate how feeling feelings can alter those beliefs without once addressing the beliefs at all.

p. 71 We are a nation and a world of seekers, a people who seek refuge in all manner of beliefs.

p. 75-76 Later in life, equipped with the cortical ability to substitute ideation for feeling, the traumatized baby can call upon a god to save him from his inner pain, even when he doesn’t know where the pain originated, or even that there is pain. He just calls upon a god to watch over him, to see that he gets justice, who won’t let him down, and above all, who will help him make it into life.

p. 106 Neurosis is the only malady on the face of this earth that feels good..numbs the feeling. Numb feels good – not ‘good’ in the absolute sense, just not ‘bad.’

So we settle..we get numbed out and feel no pain and in return, life is blah blah. The person then feels she is not getting anything out of life and seeks out salvation or a guru in one form or another.“

“We are a nation and a world of seekers, a people who seek refuge in all manner of beliefs.” The patient’s story on pages 89 – 105 told of HORRIFIC damages inflicted by believers and the subsequent consequences!

Variations of his story with its adverse childhood experiences could be told by tens of millions of people in the US alone!

Why isn’t the internet flooded with 10+ million similar stories of people who have faced their realities, and effectively addressed the real causes of what’s wrong in their lives?

Said another way: Why is the internet instead flooded with stories of 10+ million people

The many reasons why people do things that don’t truly get them well are covered in Beyond Belief and Dr. Janov’s other publications. One obstacle for people who want enduring therapeutic help is the intentional misrepresentation of Primal Therapy.

Every day I look at the results of an automated search that uses “primal therapy” as the search term. Along with the scams and irrelevancies are the “scream” results.

This misrepresentation is addressed here:

People who perpetuate the “scream” meme are only a few seconds away from search results that would inform them and their readers of accurate representations of Primal Therapy.

What purpose does it serve to misdirect people away from doing something to effectively address the real causes of what’s wrong in their lives?

Continuing with Dr. Arthur Janov’s May 2016 book Beyond Belief:

“p. 17 When someone insults us, we immediately create reasons and rationales for it. We cover the pain. Now imagine a whole early childhood of insults and assaults and how that leaves a legacy that must be dealt with.

It is why no one can convince the person out of her ideas. They serve a key purpose and should not be tampered with. We are tampering with a survival function.

p. 19 It seems like a miracle that something as intangible and invisible as an idea has the power to transform our biologic system. It makes us see what doesn’t exist and sometimes not see what does. What greater power exists than that? To be fooled is not only to convince someone to believe the false, but also to convince others to not believe the truth.

The unloved child who cannot bear the terrible feelings of hopelessness shuts down his own feeling centers and grows insensitive, not only to his pain, but to that of others. So he commits the same error on his child that was visited upon him, and he does so because of the way he was unloved early on. He cannot see his own hopelessness or that of his child.

p. 56 All defensive beliefs must have a kernel of hope inside of them. It is the embedded hopelessness that gives rise to its opposite – hope – and its accompanying biochemistry of inhibition or gating.

To be even more precise, it is the advent of pain surrounding hopelessness that produces the belief entwined with hope. All defensive belief serves the same function – repression, absorbing the energy of pain.

p. 57 An unloved child is a potential future believer.

p. 58 NO ONE HAS THE ANSWER TO LIFE’S QUESTIONS BUT YOU. How you should lead your life depends on you, not outside counsel.

We do not direct patients, nor dispense wisdom upon them. We have only to put them in touch with themselves; the rest is up to them.

Everything the patient has to learn already resides inside. The patient can make herself conscious. No one else can.”

“p. 29 The personal experience stories throughout the book are written by my patients and, with the exception of a few grammatical corrections, they are presented here exactly as they were given to me.”

All of the Primal Therapy patients’ stories started with HORRENDOUS childhoods that produced correspondingly strong beliefs!

I came across a public figure example today in 10 Defining Moments In The Childhood Of Martin Luther King Jr. The author included two items germane to an understanding of how beliefs may develop from adverse childhood experiences:

Every reference I found tied King Jr.’s suicide attempts to his grandmother’s death. What an implausible narrative!

“A whole early childhood of insults and assaults” certainly had more to do with the causes for his preteen suicide attempts.

Consider a child’s feelings of helplessness, worthlessness, pain, and betrayal when the people who are supposed to love them are cruel to them instead. Feelings like what I expressed in Reflections on my four-year anniversary of spine surgery.

Consider the appeal of escaping from this life when “The unloved child cannot bear the terrible feelings of hopelessness.”

Granted that it’s only the patient who can put together what happened in their life so that it’s therapeutic. Beyond Belief and Dr. Janov’s other publications outline the framework.

Continuing to read Dr. Arthur Janov’s May 2016 book Beyond Belief:

“p.13 Beliefs are medicine for the hopeless. They attenuate despair, vitiate loneliness, and dissipate helplessness.

p. 14 We need hope more than we need truth. Beliefs divert us from past traumas and current pains because inside the belief lies hope.

p.15 Hope is..’the meaning of life.’ It shimmers and sparkles and blinds us from seeing the bars of our prisons of belief.

We are all, in one way or another, victims of early unfulfilled need. Never think that intelligence prohibits this kind of behavior.

We search for hope here and there based on early hopelessness of which we are unaware. Nothing in one’s current life points to the problem, and nothing even in one’s childhood clarifies it.

One’s expectations may exceed reality when feelings are thrust into the arena of ideas. One no longer sees reality, but rather a projection of need.”

“We need hope more than we need truth.” Is this part of why we accept headlines as facts, and don’t pay attention to the stories’ subsequent corrections? Why do we accept as facts news articles that don’t link to the cited sources?

I had dinner earlier this week with an intelligent woman. She mentioned that she constantly listened to National Public Radio. I asked her what value she got from it, and she replied that it kept her current with events.

I asked what other news sources she sought out. She said that she didn’t usually have the time, and that NPR was a reliable source.

I didn’t further challenge her beliefs. It’s up to each individual to realize that their beliefs are symptoms of what’s ruining their one precious life.

Last weekend I engaged in essentially the same conversation over lunch with another intelligent woman who relied on conservative news sources. She also became defensive, and ended that part of our conversation as a matter of “agreeing to disagree.”

Why does intelligence seem to have little to do with accepting being propagandized?

I’ve started to read Dr. Arthur Janov’s May 2016 book Beyond Belief. Here are a few thoughts I’ve expressed to friends that were prompted by the first dozen pages of the paperback version.

“p. 5 We need a painless liberation from our insidious emotional wounds..a leader who will take the place of an emotionally distant parent for whom we will sacrifice anything just for the promise of love, protection, and caring.”

The elections of the past two presidents were symptoms of the hopelessness that most Americans feel. Both elections promised hope.

“p. 6 Beliefs sell and sell well. People will pay dearly for even the promise of fulfillment, even if it is in the next life.”

Religion can have a much worse and lasting effect on people than any politician or political system can. Politicians can drag out and delay living up to their promises.

Religious leaders don’t have to deliver much at all during their followers’ lives. In fact, it works in the leaders’ favor to minimally address their followers’ current sufferings, as that strengthens the appeal of the imaginary next life!

The past three weeks I’ve gone to 7-11 to get a morning coffee. More often than not, I see people buying lottery tickets during the 2-3 minutes when I’m there.

What accounts for this behavior? Not everyone who buys a lottery ticket is innumerate.

I’d guess that it’s a symptom of hopelessness. Feelings of hopelessness cause us to generate a faith that an exceedingly-improbable event will benefit our life. Lottery-ticket behavior follows.

State governments are responsible for these lotteries. It’s one of the ways governments prey upon their citizens’ feelings of hopelessness.

I once worked as a contractor in a government office where everyone except me pooled money every week to buy lottery tickets. I was also the only nonreligious person there.