This 2020 Australian/UK review subject was AGEs:

“AGEs are formed during cooking and food processing or produced endogenously as a consequence of metabolism. The deleterious effects of AGEs are underpinned by their ability to trigger mechanisms well known to elicit metabolic dysfunction, including the activation of inflammatory pathways, oxidative stress and impaired mitochondrial oxidative metabolism. They have been widely implicated in the complications of diabetes affecting cardiovascular health, the nervous system, eyes and kidneys.

Reactive carbonyl groups are constantly being produced via normal metabolism and when production overrides detoxification, AGEs accumulate. AGE formation may take several days or weeks to complete in the body.

Factors affecting the AGE content of food depends on the composition of protein, fat, and sugar and the types of processing and cooking methods employed, predominantly on the temperature and duration of preparation. Circulating free-AGEs concentrations [are] a good marker for dietary AGE intake while plasma protein-bound AGEs better represent endogenously produced AGEs. 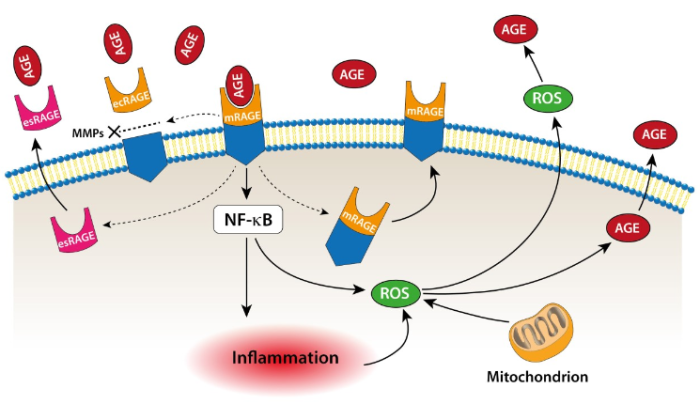 Let’s use the Australian 2019 Sulforaphane: Its “Coming of Age” as a Clinically Relevant Nutraceutical in the Prevention and Treatment of Chronic Disease as a reference for how sulforaphane may counter the effects of AGEs:

“Antioxidants in general and glutathione in particular can be depleted rapidly under conditions of oxidative stress, and this can signal inflammatory pathways associated with NF-κB. SFN [sulforaphane] has been shown to inhibit NF-κB in endothelial cells.

Two key inflammatory cytokines were measured at four time points in forty healthy overweight people [our model clinical trial, Effects of long-term consumption of broccoli sprouts on inflammatory markers in overweight subjects]. The levels of both interleukin-6 (Il-6) and C-reactive protein (CRP) declined over the 70 days during which the sprouts were ingested. These biomarkers were measured again at day 90, wherein it was found that Il-6 continued to decline, whereas CRP climbed again. When the final measurement was taken at day 160, CRP, although climbing, had not returned to its baseline value. Il-6 remained significantly below the baseline level at day 160.” 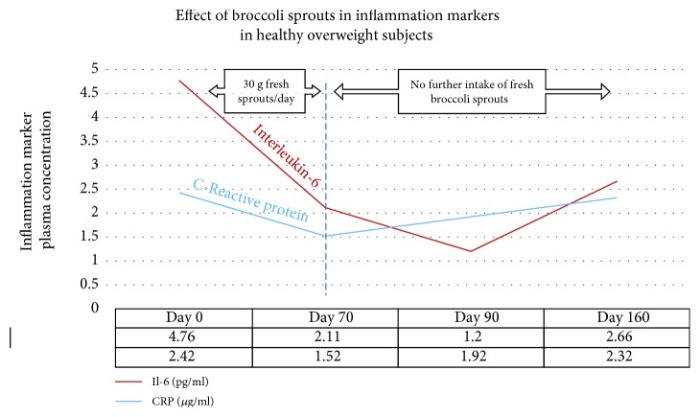 “SFN significantly activates Nrf2 and as such has the potential to modulate the expression of genes associated with redox balance, inflammation, detoxification, and antimicrobial capacity, all key components of the upstream cellular defence processes.

Toxins presented to the Phase 1 enzymes produce intermediate compounds which are sometimes more toxic to cells than the initial toxin. It is therefore important that Phase 2 is sufficiently active that the intermediate products cannot accumulate in the cellular environment.

As a monofunctional inducer, SFN has been described an ideal detoxifier, as its effect on Phase 1 is minimal compared with its significant activity on Phase 2.”

“As a mediator for amplification of the mammalian defence system against various stressors, Nrf2 sits at the interface between our prior understanding of oxidative stress and the endogenous mechanisms cells use to deal with it. Diseases known to be underpinned by oxidative stress are proving to be more responsive to amplification of cellular defences via Nrf2 activation than by administration of direct-acting antioxidant supplements.

SFN, with absolute bioavailability of around 80%, [is] capable of increasing several endogenous antioxidant compounds via the transcription factor, Nrf2.”

“Nrf2 is ubiquitously expressed with the highest concentrations (in descending order) in the kidney, muscle, lung, heart, liver, and brain. Nrf2 was shown to prevent endothelial cells from exhibiting a proinflammatory state. Nrf2 is required for protection against glucose-induced oxidative stress and cardiomyopathy in the heart.

Well in excess of 500 genes have been identified as being activated by SFN via the Nrf2/ARE [Antioxidant Response Element] pathway, and it is likely that this underestimates the number as others are being discovered. Of the available SFN clinical trials associated with genes induced via Nrf2 activation, many demonstrate a linear dose-response. More recently, it has become apparent that SFN can behave hormetically with different effects responsive to different doses. 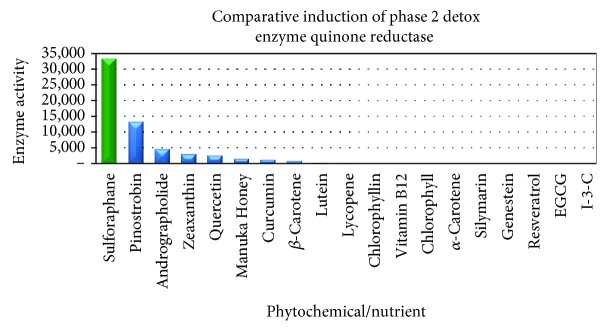 As mentioned in Changing an inflammatory phenotype with broccoli sprouts, per the above bolded part of section 3, I stopped taking N-acetyl-cysteine, the precursor to our endogenous antioxidant glutathione. I stopped taking curcumin last year due to no noticeable effects, probably because of its poor bioavailability. I may soon stop taking more vitamin E than the RDA, and β-carotene.

I changed my diet last summer to reduce AGEs, with mild effects. I expect stronger effects from also daily eating 60 grams of 3-day-old broccoli sprouts that yield 27 mg of sulforaphane after microwaving.