This 2020 US/Sweden/Denmark human study measured twins during their old age:

Understanding epigenetic changes over time in the elderly may identify pathways of decline or plasticity (e.g., maintenance or even boosts in functioning) during the aging process and help with elucidating the biology of aging and survival.

One epigenetic clock that used 2019 technology was favored over three others, including Horvath’s 2013 original clock. For some reason this study didn’t use his 2018 skin-and-blood clock that had vastly improved technology such as an 18-fold increase in genomic coverage with Illumina 450k/850k bead arrays.

These researchers’ intentions became evident with:

“The 353 Horvath clock sites were selected as best predictors of chronological age using multiple tissues. The 71 Hannum clock sites best predicted age (adjusted for sex, BMI) based on methylation observed in whole blood while the 514 sites from the Zhang prediction model relied on methylation observed in blood and saliva samples (Zhang et al., 2019).

The current findings of moderately higher heritabilities in the Zhang and Hannum sites versus the other clock sites may be in part due to our use of blood tissue.”

The 18-fold increase improved accuracy in blood for the 2018 Horvath clock. Could these researchers ignore it and claim they did their due diligence in 2019 and 2020?

A larger issue was this study’s duality paradigm of either heritability or environment being solely responsible for observed changes. Consider what A blood plasma aging clock found at ages 60 and 78 peaks: 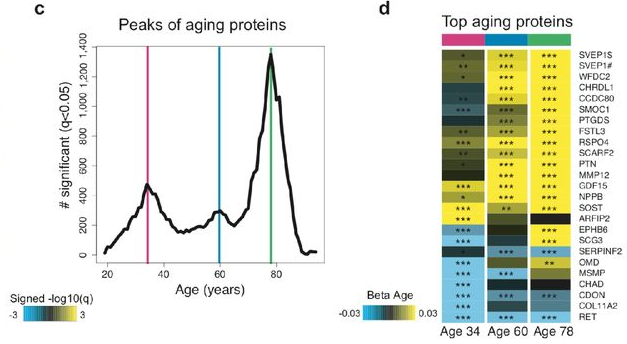 The above changes were due to life stage. Josh Mitteldorf did his usual excellent job of providing contexts for that study with New Aging Clock based on Proteins in the Blood, including:

“The implication is that a more accurate clock can be constructed if it incorporates different information at different life stages. None of the Horvath clocks have been derived based on different CpG sites at different ages, and this suggests an opportunity for a potential improvement in accuracy.”

Weren’t changes in subjects’ life stages relevant to their epigenetic changes? Why wouldn’t their life stages have been among the causes of observed effects?