“Recent studies, primarily focused on the findings from human studies, to indicate the role of DNA methylation in the associations between childhood adversity and cardiometabolic disease in adulthood. In particular, we focused on DNA methylation modifications in genes regulating the hypothalamus-pituitary-adrenal axis as well as the immune system.”

“Twin studies offer another promising design to explore the mediation effect of DNA methylation between child adversity and cardiometabolic outcomes..which could rule out heterogeneity due to genetic and familia[l]r environmental confounding.”

As it so happened, the below 2018 study provided some evidence.

http://www.sciencedirect.com/science/article/pii/S0167527317352762 “The role of DNA methylation in the association between childhood adversity and cardiometabolic disease” (not freely available) Thanks to lead author Dr. Guang Hao for providing the full study.

“Tested the hypothesis that victimization is associated with DNA methylation in the Environmental Risk (E-Risk) Longitudinal Study, a nationally representative 1994-1995 birth cohort of 2,232 twins born in England and Wales and assessed at ages 5, 7, 10, 12, and 18 years. Multiple forms of victimization were ascertained in childhood and adolescence (including physical, sexual, and emotional abuse; neglect; exposure to intimate-partner violence; bullying; cyber-victimization; and crime).

Hypothesis-driven analyses of six candidate genes in the stress response (

) did not reveal predicted associations with DNA methylation.

Epigenetic epidemiology is not yet well matched to experimental, nonhuman models in uncovering the biological embedding of stress.”

One of the sad findings was that as the types of trauma inflicted by other people on the subjects increased, so did the percentage of subjects who hurt themselves by smoking. Two-thirds of teens who reported three or more of the seven adolescent trauma types also smoked by age 18: 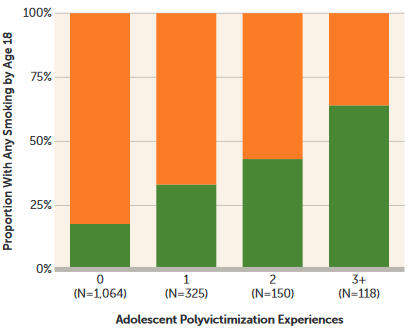 Another somber finding was:

“The vast majority of subsequent human studies, including the present one, have relied on peripheral blood. This choice is expedient, but also scientifically reasonable given the aim of detecting effects on stress-related physical health systems that include peripheral circulating processes (immune, neuroendocrine).

But whole blood is heterogeneous, and although cell-type composition can be evaluated and controlled, as in the present study, it does raise the question of whether peripheral blood is a problematic surrogate tissue for research on the epigenetics of stress.

Comparisons of methylomic variation across blood and brain suggest that blood-based EWAS may yield limited information relating to underlying pathological processes for disorders where brain is the primary tissue of interest.”

1. The comment on “epigenetic epidemiology” overstated the study’s findings because the epigenetic analysis, although thorough, was limited to peripheral blood DNA methylation. Other consequential epigenetic effects weren’t investigated, such as histone modifications and microRNA expression.

2. An unstated limitation was that the DNA methylation analyses were constrained by budgets. Studies like The primary causes of individual differences in DNA methylation are environmental factors point out restrictions in the methodology:

“A main limitation with studies using the Illumina 450 K array is that the platform only covers ~1.5 % of overall genomic CpGs, which are biased towards promoters and strongly underrepresented in distal regulatory elements, i.e., enhancers.

Another advantage of WGBS is its ability to access patterns of non-CpG methylation.”

I’d expect that in the future, researchers with larger budgets would reanalyze the study samples using other techniques.

3. The researchers started and ended the study presenting their view of human “embedding of stress” as a fact rather than a paradigm. Epigenetic effects of early life stress exposure compared and contrasted this with another substantiated view.

https://ajp.psychiatryonline.org/doi/full/10.1176/appi.ajp.2017.17060693 “Analysis of DNA Methylation in Young People: Limited Evidence for an Association Between Victimization Stress and Epigenetic Variation in Blood” (not freely available) Thanks to coauthor Dr. Helen Fisher for providing the full study.