“Adversity during the perinatal period is a significant risk factor for the development of neurodevelopmental disorders long after the causative event. Despite stemming from a variety of causes, perinatal compromise appears to have similar effects on the developing brain, thereby resulting in behavioural disorders of a similar nature.

The above conditions are associated with imbalanced excitatory-inhibitory pathways resulting from reduced GABAergic signalling. Methylation of the GAD1/GAD67 gene, which encodes the key glutamate‐to‐GABA synthesizing enzyme Glutamate Decarboxylase 1, resulting in increased levels of glutamate is one epigenetic mechanism that may account for a tendency towards excitation in disorders such as ADHD.

The posterior cerebellum’s role in higher executive functioning is becoming well established due to its connections with the prefrontal cortex, association cortices, and limbic system. It is now suggested that disruptions to cerebellar development, which can occur due to late gestation compromises such as preterm birth, can have a major impact on the region of the brain to which it projects. 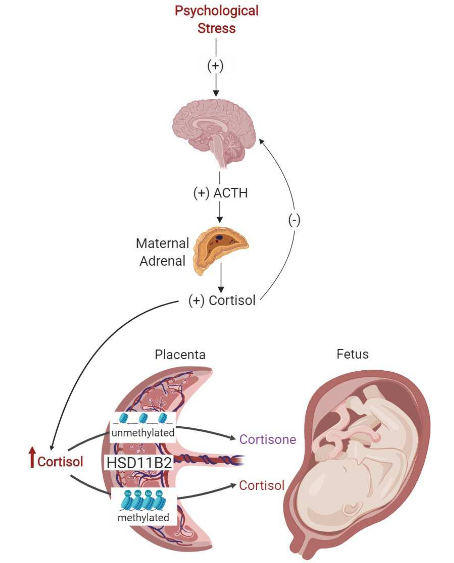 Activation of the maternal hypothalamic-pituitary adrenal (HPA) axis and placental protection. Psychological stress is perceived by the maternal HPA axis, which stimulates cortisol release from the maternal adrenal gland.

High levels of maternal cortisol are normally prevented from reaching the fetus by the 11β-hydroxysteroid dehydrogenase 2 (HSD11B2) enzyme, which converts cortisol to the much less active cortisone. Under conditions of high maternal stress, this protective mechanism can be overwhelmed, with the gene encoding the enzyme becoming methylated, which reduces its expression allowing cortisol to cross the placenta and reach the fetus.”

The reviewers extrapolated many animal study findings to humans, although most of their own work was with guinea pigs. The “suggest” and “may” qualifiers were used often – 22 and 37 times, respectively. More frequent use of the “appears,” “hypothesize,” “propose,” and “possible” terms was justified.

As a result, many reviewed items such as the above graphic and caption should be viewed as hypothetical for humans rather than reflecting solid evidence from quality human studies.

The reviewers focused on the prenatal (before birth) period more than the perinatal (last trimester of pregnancy to one month after birth) period. There were fewer mentions of birth and early infancy adversities.