Skip to content
HomePart 2 of Do broccoli sprouts treat migraines?

To follow up Do broccoli sprouts treat migraines? which used a PubMed “sulforaphane migraine” search, a PubMed “diindolylmethane” search came across a 2020 Czech human cell study Antimigraine Drug Avitriptan Is a Ligand and Agonist of Human Aryl Hydrocarbon Receptor that Induces CYP1A1 in Hepatic and Intestinal Cells that had this informative Introduction:

“The aryl hydrocarbon receptor (AhR) transcriptionally controls a wide array of genes. AhR is a critical player in human physiology (e.g., hematopoiesis) and also in many pathophysiological processes such as diabetes, carcinogenesis, inflammation, infection or cardiovascular diseases.

Suitable candidates for off-targeting AhR could be the antimigraine drugs of triptan class, which have an indole core in their structure. Indole-based compounds were demonstrated as ligands of AhR, including dietary indoles (e.g., indole-3-carbinol and diindolylmethane).”

Adding AhR to the search showed:

Changing the PubMed search to “icz migraine” pulled up a 2013 review Biomedical Importance of Indoles that described sumatriptan as an indole, and:

“Since DIM accumulates in the cell nucleus, it likely contributes to cell nuclear events that have been ascribed to I3C.”

“In the study reported here, there was no statistically significant difference in serious adverse events between groups; in fact a higher proportion of women in the placebo group reported a serious adverse event. Although this study did not have sufficient power to study migraines, we did find a non-significant increase in reported headaches (18% on DIM, 12% on placebo, P=0.12).”

Returning to the original PubMed “sulforaphane migraine” search, Bioavailability of Sulforaphane Following Ingestion of Glucoraphanin-Rich Broccoli Sprout and Seed Extracts with Active Myrosinase: A Pilot Study of the Effects of Proton Pump Inhibitor Administration included one subject who took migraine medication. They weren’t a study outlier, however. 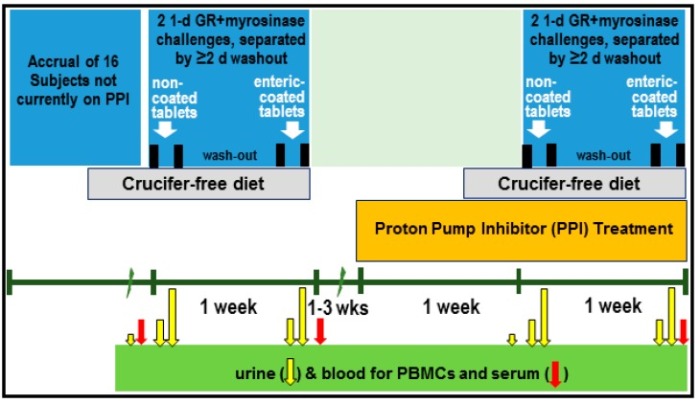 3 thoughts on “Part 2 of Do broccoli sprouts treat migraines?”