The POPs mixture represents the pollutant composition found in Ringed seal blubber of Northern Quebec which is a traditional food of Inuit people in that region. 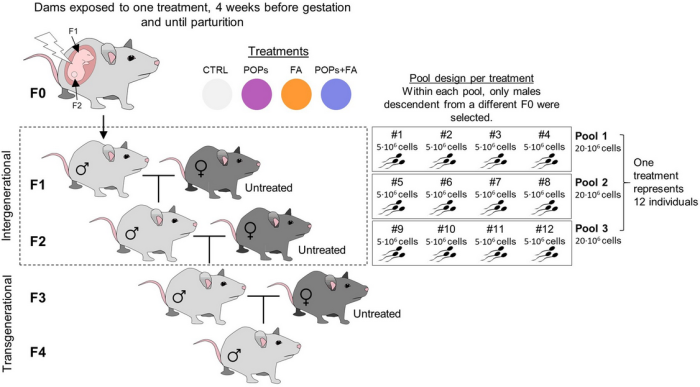 F0 founder dams were gavaged with the POPs mixture corresponding to 500 µg PCBs/kg body weight or corn oil (CTRL) thrice weekly and were fed the AIN-93G diet containing either 2 mg/kg (1X) or 6 mg/kg (3X) of FA ad libitum. Treatments were only administered to F0 founder dams for 9 weeks in total; 5 weeks before mating to untreated males at postnatal day 90 and until parturition. Subsequent lineages, F1 through F4, were neither exposed to POPs nor 3X FA – instead they received 1X FA diet ad libitum.”

“The protective role of FA supplementation in the F1 sperm may be partly explained by its antioxidant activity if the miRNA changes are caused by oxidative stress induced by POPs exposure. If, however, the miRNA changes in POPs exposed sperm are due to an altered methylation capacity or dysregulated nucleotide synthesis or mutations, then the increased availability of methyl groups provided by FA supplementation may mitigate the POPs effect by supporting DNA repair through nucleotide synthesis. Additional studies of the interaction between POPs and FA are required.”

“It remains puzzling how environmentally perturbed paternal miRNAs can persist across multiple generations. To become heritable, parts of the sperm chromatin must escape reprogramming, leading to the possibility that sperm miRNA profiles are subsequently modified by environmental factors. There are clear examples of sperm DNA methylation that escape reprogramming and histones can be involved.”

The study may have produced more clarity had its design investigated DNA methylation as Epigenetic transgenerational inheritance extends to the great-great-grand offspring did. That study also had an intercross breeding scheme with the populations for the F1 – F3 generations before an outcross for the F4 generation because:

“An intercross within the exposure lineage population (with no sibling or cousin breeding to avoid inbreeding artifacts) provides the optimal phenotypes (i.e. pathology) and germline epigenetic alterations.”

Which breeding scheme do you think would more fairly represent the humans of this study? I’d guess that intercross would – if all Inuits eat Ringed seal blubber and have children with other Inuits.