Skip to content
HomeEat broccoli sprouts for your eyes

This 2020 review subject concerned a leading cause of blindness:

“Advanced glycation end products (AGEs) are toxic compounds that have adverse effects on many tissues including the retina and lens. AGEs promote formation of reactive oxygen species (ROS), which, in turn, boost production of AGEs, a vicious cycle.

Diabetic retinopathy (DR) is a devastating microvascular complication of diabetes mellitus and the leading cause of blindness in working-age adults. The onset and development of DR is multifactorial. Lowering AGEs accumulation may represent a potential therapeutic approach.

Once AGEs are formed, most are irreversible. Cataracts are perhaps the earliest pathobiology of AGEs: 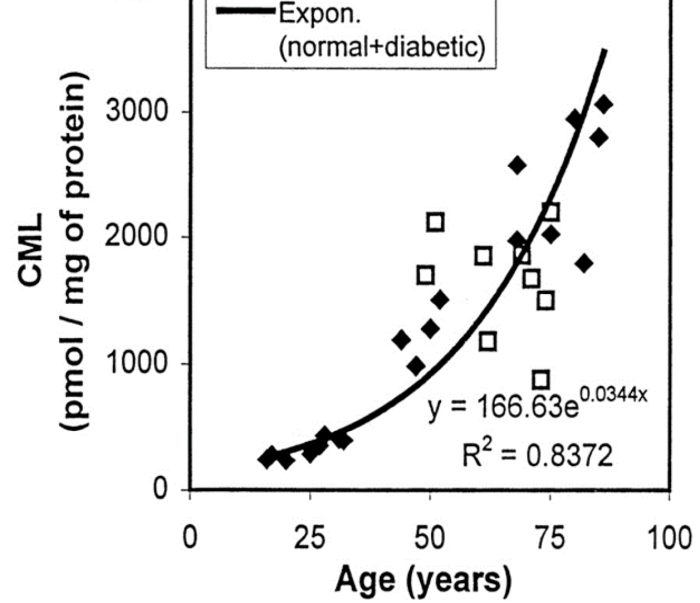 Nε-(carboxymethyl)-lysine (CML) [a representative AGE] in lens crystallins from diabetic (■) and non-diabetic (♦) subjects as a function of age.

The glyoxalase system is a protective mechanism that slows down synthesis of AGEs by limiting reactive dicarbonyls formed during sugar metabolism. Glutathione (GSH) in the eye is present at concentrations many times blood levels, and is a critical component of the glyoxalase system.

No AGE inhibitors have reached clinical use. The glyoxalase system and discovery of compounds that enhance this detoxifying activity represent a therapeutic alternative to fight glycation-derived damage.”

The above graph – plotting a cataract AGE level against chronological age – represented life stage progression without effective personal agency, without taking responsibility for your one precious life.

Citation 156 was Activation of Nrf2 attenuates carbonyl stress induced by methylglyoxal in human neuroblastoma cells: Increase in GSH levels is a critical event for the detoxification mechanism (not freely available):

“The present study focused on the methylglyoxal (MG) detoxification mechanism. MG treatment resulted in accumulation of modified proteins bearing the structure of AGEs.

This accumulation was suppressed by activation of the Nrf2 pathway prior to MG exposure via pre-treatment with an Nrf2 activator:

Although pre-treatment with the Nrf2 activator did not affect mRNA levels of GLO1, expressions of GCL and xCT mRNA, involved in GSH synthesis, were induced prior to increase in GSH levels.

These results indicated that increase in GSH levels promoted formation of the GLO1 substrate, thereby accelerating MG metabolism via the glyoxalase system and suppressing its toxicity. Promotion of GSH synthesis via the Nrf2/Keap1 pathway is important in MG detoxification.”