This 2021 rodent study focused on global histone acetylation as a model to understand roles of microbially produced short-chain fatty acids in liver function:

“Despite the utility of germ-free mice in probing complex interactions between gut microbiota and host physiology, germ-free mice are developmentally, physiologically, and metabolically unique when compared with their conventionally housed counterparts. We sought to determine whether antibiotic-mediated microbiota depletion would affect global hepatic histone acetylation states through SCFA-dependent mechanisms, as previously observed in germ-free mice.

The inability of antibiotic-mediated microbiota depletion to recapitulate findings observed in germ-free mice suggests that the transition from a germ-free to a colonized mouse leads to resilient alterations in hepatic histone acetylation states that cannot be altered by further modulating the microbial environment. This finding is distinct from other germ-free phenotypes that are considered to be partially reversible, with clear alterations in their function observed after antibiotic treatment. 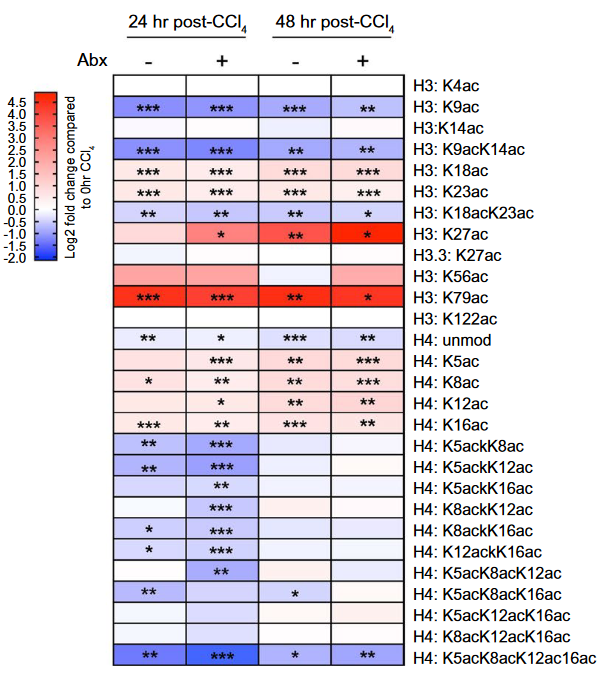 Comparing antibiotic-treated and untreated mice that both received CCl4 at 24 and 48 hours after injury, there were almost no histone acetylation differences. This demonstrates that hepatic injury leads to a global shift in histone acetylation that is primarily independent of gut microbiota.

Results suggest that microbial and dietary modifications to the gut microbiome in conventionally raised mice are not a means to modulate global hepatic histone acetylation. Microbiota-dependent landscaping of the hepatic epigenome appears static in nature, while the hepatic transcriptome is responsive to alterations in the gut microbiota, yet independent of global histone acetylation.

Findings underscore significant differences between these model systems that should be taken into account when considering their relevance to human biology.”

1. By describing “a key feature of embryonic development,” this study provided a gut microbiota-liver analogy of critical periods. If developmental events don’t happen when they are required, it’s probable that their window is missed, and won’t reopen later for a second chance at normalizing.

2. Many studies used a germ-free animal model, such as:

This study provided evidence for a limitation of this model, especially when extrapolating germ-free animal results to humans without similarly testing humans.