My 600th curation is a 2020 rodent study from Dr. Michael Skinner’s labs at Washington State University:

“Numerous environmental toxicants have been shown to induce the epigenetic transgenerational inheritance of disease and phenotypic variation. Alterations in the germline epigenome are necessary to transmit transgenerational phenotypes.

In previous studies, the pesticide DDT and the agricultural fungicide vinclozolin were shown to promote the transgenerational inheritance of sperm differential DNA methylation regions, non-coding RNAs and histone retention, which are termed epimutations. The current study was designed to investigate the developmental origins of the transgenerational differential histone retention sites (called DHRs) during gametogenesis of the sperm.

In addition to alterations in sperm DNA methylation and ncRNA expression previously identified, the induction of DHRs in the later stages of spermatogenesis also occurs. This novel component of epigenetic programming during spermatogenesis can be environmentally altered and transmitted to subsequent generations. 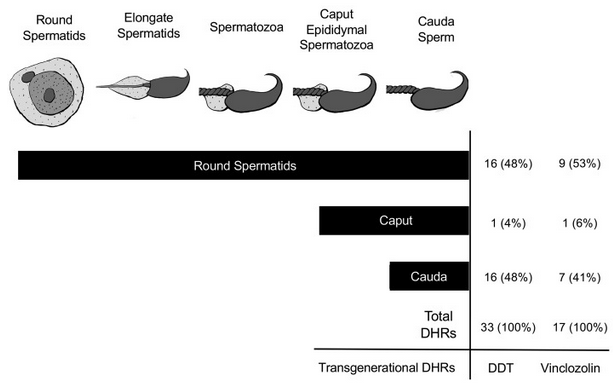 While the DHR may be consistent and present between the stages of development, the histone modifications may be altered. Several of the core histone retention sites absent in the DHRs had altered histone methylation. This adds a level of complexity to the potential role of histone retention in that it may be not only the retention, but also the alterations in histone epigenetic modifications.

The DHRs had positional associations with genes and the major functional categories were signaling, metabolism and transcription.

In the event the embryo stem cell population has a modified epigenetics and corresponding transcriptome, then all somatic cells derived from the stem cell population will have an altered cascade of epigenetic and gene expression programming to result in adult differentiated cells with altered epigenetics and transcriptomes. Previous observations have demonstrated in older adult human males alterations in histone retention develop and are associated with infertility.

Similar observations have also been provided for the development of differential DNA methylation regions (DMRs) induced by environmental toxicants such as DDT and vinclozolin. Since DHRs have a similar developmental programming, other epigenetic processes such as ncRNA are also anticipated to be similar.”

This study, like its dozens of predecessors performed year after year by this research facility, provided evidence for mechanisms of epigenetic transgenerational inheritance. The studied F3 generation members were great-grand-offspring, the first generation to have no direct exposure to DDT and vinclozolin.

As pointed out in A compelling review of epigenetic transgenerational inheritance:

There are varieties of mischaracterizations and hand-waving denials of epigenetically-inherited diseases. People don’t want to hear about and read proof that something we did or experienced disfavored our children, who unwittingly passed resultant problems on to their children, and which furthered on to their children’s children.