“The presence of brown adipose tissue (BAT) and the season of conception are linked to BMI in humans. In mice, we demonstrate that cold exposure (CE) of males, but not females, before mating results in improved systemic metabolism and protection from diet-induced obesity of the male offspring.

Adipose tissue functions as a dynamic endocrine organ, and its ‘quality’ is considered to be an important factor in the development of obesity-associated comorbidities. Adipose tissue can be divided into the functionally and morphologically distinct white adipose tissue (WAT) and BAT. The main function of BAT is energy dissipation via nonshivering thermogenesis, which is enabled by the presence of uncoupling protein (UCP1) in the inner mitochondrial membrane.

In humans and in mice, seasonal or experimental CE induces an epigenetic programming of the sperm such that the offspring harbor hyperactive BAT and an improved adaptation to overnutrition and hypothermia. 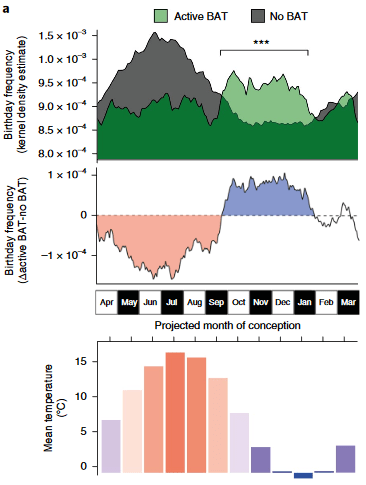 The study provided another example of how stressful experiences of parents – even those before offspring conception – affected their offspring.

Edit 8/13/2018: I substituted the authors’ corrected graphic where the calendar month started with April vs. January.

A review of this study was made in The imperative of human transgenerational studies.