“A computational analysis was performed to explore processes and pathways associated with genes targeted either by:

miRNAs are noncoding RNAs containing between 19 and 24 nucleotides, which act as regulators of gene expression both in plants and animals via degradation or inhibition of target mRNAs. miRNAs participate in several biological processes, such as apoptosis, cell growth, differentiation, proliferation, immune response, intercellular communication, RNA stability and processing, stress response, and others.

miRNAs reported in the literature as being upregulated or downregulated in response to broccoli bioactive compounds, with a significant change in expression of at least 2-fold, were selected and used to predict possible mechanisms exerted through miRNA-related actions. 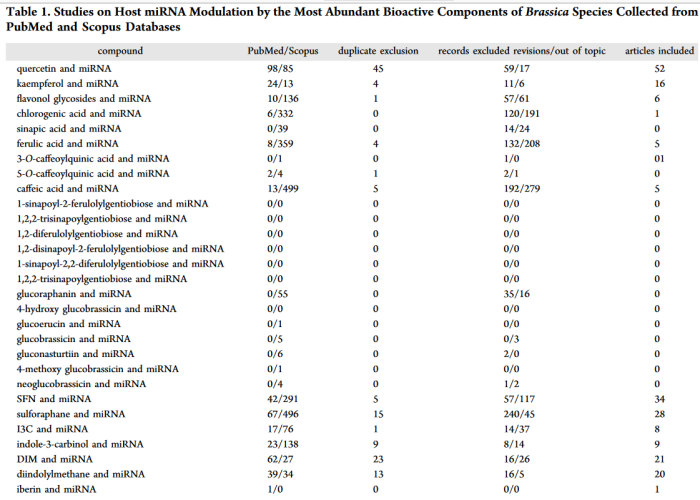 Cooking, frying, microwaving [2 minutes in a 800W microwave on maximum power], steaming, and blanching were tested along with raw broccoli heads and sprouts and juice. Raw broccoli sprouts showed higher miRNA levels [in half of those tested]. Nearly all treatments did not significantly reduce miRNA levels compared to raw broccoli.

Samples of raw or boiled broccoli, juice, and broccoli sprouts were subjected to in vitro digestion, simulating GI conditions. miRNA survival levels dropped to percentages ranging approximately between 0.1 and 10% at the end of in vitro digestion, although complete elimination was not observed in any case.

I included part of this study’s methods to demonstrate the futility of a PubMed search on any topic. For example, a “caffeic acid and miRNA” search on Scopus returned 499 potential papers. In comparison, that search on PubMed returned 13 papers, or 2.6% of potentially relevant research.