“Our findings showed evidence for region-specific effects of genotype and GxE on individual differences in human fetal development of the hippocampus and amygdala. Gene x Environment models outcompeted models containing genotype or environment only, to best explain the majority of measures but some, especially of the amygdaloid microstructure, were best explained by genotype only. 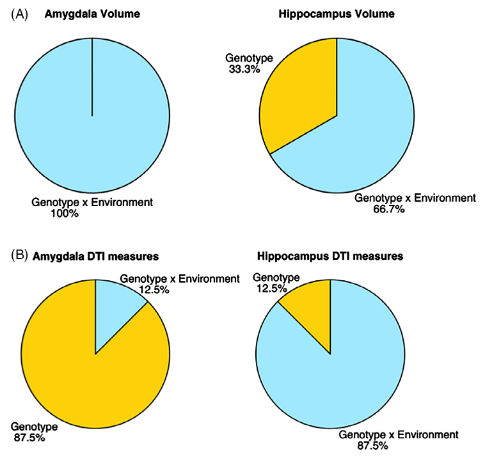 The transcription factor CUX1 was implicated in the genotypic variation interaction with prenatal maternal health to shape the amygdala. It was also a central node in the subnetworks formed by genes mapping to the CpGs in neonatal umbilical cord DNA methylation data associating with both amygdala and hippocampus structure and substructure.

Our results implicated the glucocorticoid receptor (NR3C1) in population variance of neonatal amygdala structure and microstructure.

Estrogen in the hippocampus affects learning, memory, neurogenesis, synapse density and plasticity. In the brain testosterone is commonly aromatized to estradiol and thus the estrogen receptor mediates not only the effects of estrogen, but also that of testosterone.”

https://onlinelibrary.wiley.com/doi/full/10.1111/gbb.12576 “Neonatal amygdalae and hippocampi are influenced by genotype and prenatal environment, and reflected in the neonatal DNA methylome” (not freely available)