We’ll start with a 2018 epigenetic clock human study from Finland:

“We evaluated the association between maternal antenatal depression and a novel biomarker of aging at birth, namely epigenetic gestational age (GA) based on fetal cord blood methylation data. We also examined whether this biomarker prospectively predicts and mediates maternal effects on early childhood psychiatric problems.

Listening to a podcast by one of the coauthors, although the researchers’ stated intent was to determine the etiology of the findings, I didn’t hear any efforts to study the parents in sufficient detail to be able to detect possible intergenerational and transgenerational epigenetic inheritance causes and effects. There were the usual “associated with” and “it could be this, it could be that” hedges, which were also indicators of the limited methods employed toward the study’s limited design.

Why was an opportunity missed to advance human research in this area? Are researchers satisfied with non-causal individual differences non-explanations instead of making efforts in areas that may produce etiological findings?

The second 2018 epigenetic clock human study was from Alabama:

Both DNA methylation age estimates were highly correlated with chronological age. We found that the Horvath and Hannum measures of epigenetic age acceleration were moderately correlated. 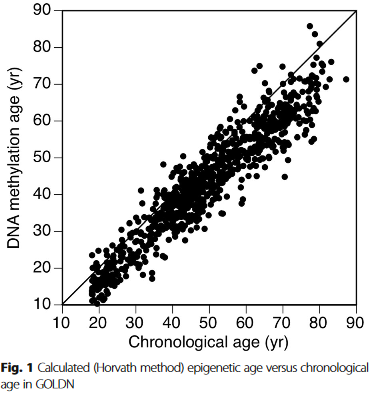 https://clinicalepigeneticsjournal.biomedcentral.com/track/pdf/10.1186/s13148-018-0481-4 “Metabolic and inflammatory biomarkers are associated with epigenetic aging acceleration estimates in the GOLDN study”

The third 2018 epigenetic clock human study was a meta-analysis of cohorts from the UK, Italy, Sweden, and Scotland:

“The trajectories of Δage showed a declining trend in almost all of the cohorts with adult sample collections. This indicates that epigenetic age increases at a slower rate than chronological age, especially in the oldest population.

Some of the effect is likely driven by survival bias, where healthy individuals are those maintained within a longitudinal study, although other factors like underlying training population for the respective clocks may also have influenced this trend. It may also be possible that there is a ceiling effect for Δage whereby epigenetic clock estimates plateau.”

https://academic.oup.com/biomedgerontology/advance-article/doi/10.1093/gerona/gly060/4944478 “Tracking the Epigenetic Clock Across the Human Life Course: A Meta-analysis of Longitudinal Cohort Data”