This 2019 Dutch/German/Romanian perspective aimed for a better understanding of immune systems:

Innate immune responses have the capacity to be trained and thereby exert a new type of immunological memory upon reinfection. The central feature of trained innate immune cells is the ability to mount a qualitatively and quantitatively different transcriptional response when challenged with microbes or danger signals. Evidence supports the convergence of multiple regulatory layers for mediating innate immune memory, including changes in chromatin organization, DNA methylation, and probably non-coding RNAs such as microRNAs and/or long non-coding RNAs.

Two properties of the adaptive immune response are mediated by two fundamentally different types of mechanisms:

To be effective, highly specific immune response requires huge diversity of receptors and antibodies, which is achieved by somatic rearrangement of gene segments. Recombination results in millions of TCR and antibody variants able to recognize and neutralize millions of various antigens.” 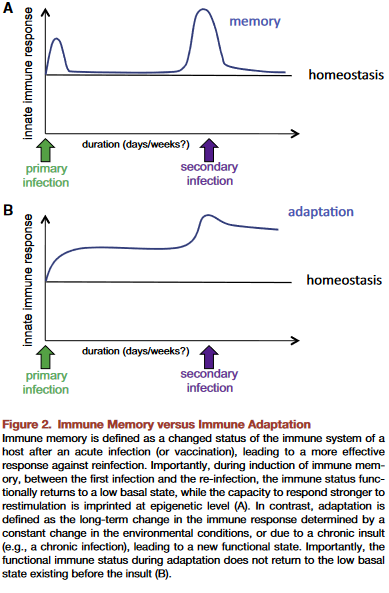 The paper included speculations such as the “Evidence supports..probably non-coding RNAs” quoted above, and the penultimate sentence:

“One can envision that vaccines that are capable of inducing both forms of immune memory at the same time would be more effective.”

100% factual evidence is preferred. The paper’s overall information can only be as accurate as the paper’s least accurate information.

The lead author coauthored A dietary supplement that trains the innate immune system and a study referenced in Eat your oats.

https://www.sciencedirect.com/science/article/pii/S1931312818306334 “Innate and Adaptive Immune Memory: an Evolutionary Continuum in the Host’s Response to Pathogens” (not freely available)