This 2014 UK study of identical and fraternal twins found that an average of 62% of the differences among their scores on a significant test given at age 16 were due to genetic factors:

“Genetic influence is greater for achievement than for intelligence, and other behavioral traits are related to educational achievement largely for genetic reasons.”

However, the “genetic reasons” term didn’t mean that the researchers actually took genetic samples. From one news article:

The sets of identical twins were definitely not the 100% same genetic makeup between themselves at age 16 as they were at conception, and that assumption was the foundation of the researchers’ model: 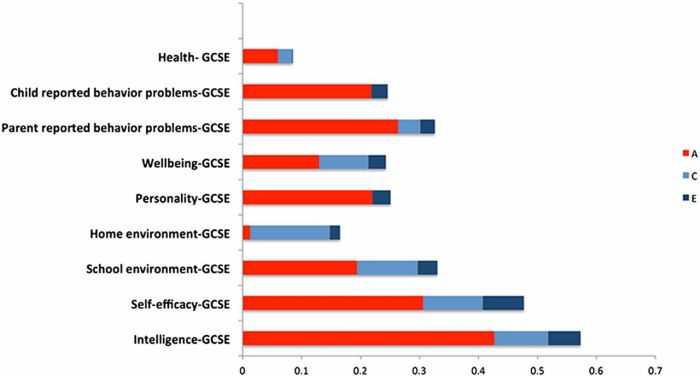 The researchers didn’t provide evidence that “genetic reasons” were causal factors to the stated extent. Although the model’s numbers may have indicated that the method’s results were valid, that didn’t necessarily mean that the reality of genetic and epigenetic influences on the subjects were represented to the stated precision by the results.

The weather analogy of Scientific evidence applies to this study’s methods:

“We can think about what we mean by evidence. For example, that when you see dark storm clouds overhead, that’s strong evidence that it’s about to rain. If you smell a certain scent, that’s maybe weak evidence that it’s about to rain. And if we see the dark storm clouds and then we smell the scent, the evidence doesn’t get weaker: if anything, it gets stronger.

But P-values in a circumstance like that, where you have a very small P-value in one dataset and a not-so-small P-value in a second dataset, you put the data together and the P-value will tend to sort of average.

Better methods of estimating “the relative contributions of genetic and environmental factors” are available with actual genetic sampling. One way is to measure the degree of DNA methylation of genes as did:

The study and its news coverage were full of politically-correct buzzwords – for example, the researchers’ statement:

“The results also support the trend in education toward personalized learning.”

This “personalized learning” is a teacher not telling a student:

“You’re doing poorly at math. You need to pay attention in class and do the homework.”

“You have a different learning style. We’ll tailor the math lessons to your style.”

The funniest thing I saw in the study’s news coverage was this one where someone argued that the researchers were wrong and that they needed educational psychologists on their staff to interpret the data. Guess the profession of the arguer!