To follow up Estimating daily consumption of broccoli sprout compounds, the main point of which was: how can a person guide their actions with evidence when a broccoli cultivated variety’s beneficial characteristics aren’t known?

I focus on broccoli sprout lab analyses of 3 cultivars made in a 2017 German study Isothiocyanates, Nitriles, and Epithionitriles From Glucosinolates Are Affected by Genotype and Developmental Stage in Brassica oleracea Varieties. Here are rounded numbers from the supplementary material: 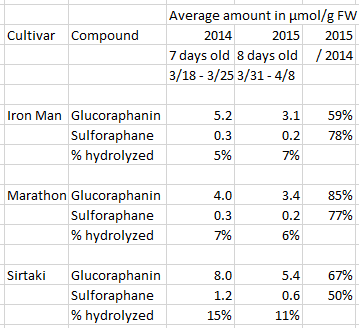 I read and reread, and didn’t come up with a satisfactory answer. Maybe it’s a language difference, but this is an insufficient explanation:

“Decreased myrosinase activity probably was the reason for the low levels of hydrolysis products formed in broccoli cv. Sirtaki in 2015 compared to 2014, while 70% [67%] of the GLS concentration of 2014 was present.”

What caused “decreased myrosinase activity?” And why would that be explanatory for just one cultivar when two others also experienced “low levels of hydrolysis products?”

Greenhouse-grown broccoli sprouts clearly varied between batches. Temperatures and sun radiation were tossed in but not shown to have been explanatory variables.

2. Could a person infer from one cultivar’s 2014 lab report how much sulforaphane they would consume from that cultivar in 2015? No.

3. Without knowing the broccoli sprouts’ cultivar, could a person infer from a glucoraphanin amount how much sulforaphane they would consume?

No. The 2014 Iron Man 5.2 μmol per g glucoraphanin wasn’t that different from the 2015 Sirtaki 5.4 amount. But Iron Man vs. Sirtaki differences of 0.3 vs. 0.6 μmol per g sulforaphane amounts and 5% vs. 11% hydrolyzed showed Sirtaki cultivar’s unrounded numbers had double or more those of Iron Man.

No. The Sirtaki 8.0 μmol per g sprout glucoraphanin amount was the highest cultivar, but its fully developed head was lowest at 0.27.

5. Could differences be explained by the broccoli sprout batches’ one-day age difference?

6. Did both years use the same seed lot? If so, could a one year aging of seeds explain differences?

Here’s a graphic of the 2014 batch major broccoli sprout compounds. Glucoraphanin is red 4MSOB in A, and sulforaphane is red 4MSOB-ITC in C: 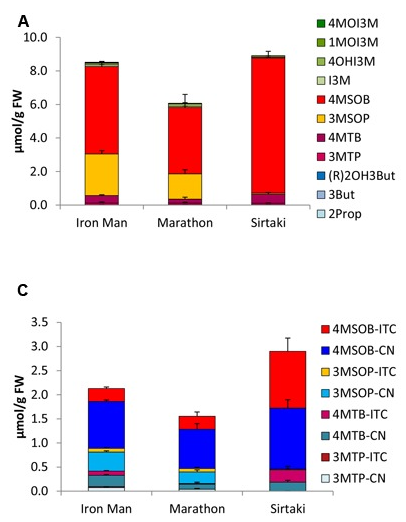 This study demonstrated that are many unknowns even with lab analyses. It would seem that not much could be accurately inferred past knowing that broccoli sprouts of one cultivar produced more sulforaphane than another.

Would similar lab reports help current purchase decisions? I haven’t come across a broccoli seed bulk supplier who had lab reports for products they’re selling. When pressed on Amazon they at best say Calabrese, which has described hundreds of cultivars. Such as Iron Man and Marathon, which are also named Calabrese Iron Man F1 and Calabrese Marathon F1.

Obtaining information for each batch would probably cost them a lot of money, which would be passed on to their customers. Lab reports for a different batch than the broccoli seed offered may have limited utility to consumers.

It would assist broccoli seed consumers to at least know the cultivar. This study’s genotypes had a greater effect than did environmental influences.