Skip to content
HomeOne example of how experience changes the brain

“Neural representations within the mouse hypothalamus, that underlie innate social behaviours, are shaped by social experience.

Sex-specific neuronal ensembles gradually separated as the mice acquired social and sexual experience. In mice permitted to investigate but not to mount or attack conspecifics, ensemble divergence did not occur. However, 30 minutes of sexual experience with a female was sufficient to promote the separation of male and female ensembles.

These observations uncover an unexpected social experience-dependent component to the formation of hypothalamic neural assemblies controlling innate social behaviours. More generally, they reveal plasticity and dynamic coding in an evolutionarily ancient deep subcortical structure that is traditionally viewed as a ‘hard-wired’ system.” 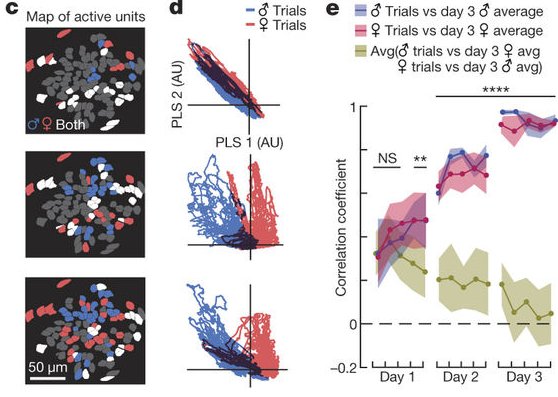 Hat tip to Neuroskeptic for both alerting me to the study and simplifying its overly-dense graphics.