This 2020 rodent study ran a series of experiments relating gut health factors. I left some items out that Google Translate didn’t handle well.

“This study investigated effects of food factors on colonic microbiota, fermentation products, mucins, immunoglobulin A (IgA) and alkaline phosphatase (ALP) activity. Colonic ALP activity was positively correlated with colonic luminal variables such as fecal mucin level, ratio of Bifidobacterium spp., and level of n-butyrate, which are associated with a more favorable colonic environment. We propose that the increase of colonic ALP activity induced by fermentable non-digestible carbohydrates may be important for protection of gut epithelial homeostasis.

In order to investigate nutritional conditions on inducing colon ALP activity by oligosaccharide intake, the difference in lipid quality ingested was examined under a high-fat diet. 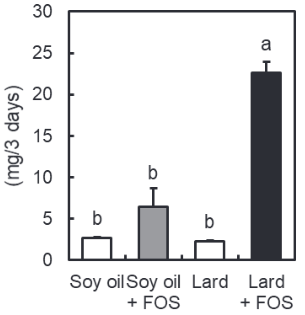 In this study, it was newly found that the effect of indigestible oligosaccharide intake on increasing colon ALP activity differs depending on nutritional conditions such as type of lipid. Furthermore, it was found that the increase in colon ALP activity under indigestible sugar intake has a positive correlation with factors involved in maintaining function of the intestinal environment, such as mucin.”

https://www.jstage.jst.go.jp/article/jsnfs/74/1/74_9/_article “Modulation of the Colonic Luminal Environment by Food Factors” (in Japanese)

I arrived at this study by it citing a 2011 study Vitamin K1 (Phylloquinone) or Vitamin K2 (Menaquinone-4) Induces Intestinal Alkaline Phosphatase Gene Expression. More on IAP in this 2020 video: